Have you ever gone to a music festival? During a summer holiday in Hungary, I went to attend my the first music festival. It was really an excitement to us! Since 2002 the Sziget Festival had been running every year in Budapest. It lasts for a week, which famous singers and bands from around the world perform very brilliant. In Hungarian the word ‘sziget’ mean island, which is a very appropriate name although the festival takes place on a large island in the middle of the Danube River in Budapest. Thousands people come on special “party trains” from other country such as France and Italy.

The ancient city of Xi'an in China holds many treasures. And last month, archaeologists working there made an important discovery—a buried palace built in the third century B.C. to honor China's first emperor.

The entire palace measures roughly 2,260 feet long by 820 feet wide. It includes 10 courtyard houses and one main building. Archaeologists found bricks and pieces of pottery at the site of the palace, as well as the remains of walls and roads.

The palace is part of the massive burial complex of Emperor Qin Shihuangdi. He conquered seven warring kingdoms and united ancient China in 211 B.C.

Qin Shihuangdi wanted his legacy, or accomplishments, to be remembered forever. So he hired more than 700,000 workers to build his funeral complex in Xi'an. It represents a miniature version of his vast kingdom.

The complex also includes the world-famous terra-cotta army, a collection of more than 8,000 life-size clay statues. These sculptures represent soldiers, acrobats, and horses from the Qin Dynasty (221 B.C.-206 B.C.). Scientists have not yet found all these terra-cotta warriors, even though they discovered more of the statues last summer.

Farmers discovered the complex by accident in 1974. Since then, scientists studying the site have learned a great deal about life in ancient China. But much of the emperor's tomb has yet to be dug up, or unearthed. Many of the artifacts (objects from the past) are so old that scientists cannot preserve them.

"Archaeologists fully acknowledge that nobody in the world has the technology (to safely dig up Xi'an's treasures) yet," explains Kristin Romey, an expert on Chinese archaeology.

But as technology improves, archaeologists will keep digging to uncover the rest of the wonders that still lie buried in Xi'an.

"It's one of the most important archaeological discoveries that's waiting to be made," says Romey, "and we know where it is."

【1】How long is the history of the newly found palace?

【2】Why did Qin Shihuang have people build his tomb?

A. To keep all of his treasures in store.

B. To expect people to remember him forever.

C. To prevent his body from disappearing soon.

【3】What causes trouble to dig out the emperor's tomb?

A. The local government doesn't support it.

B. Archaeologists are in great need.

C. There isn't plenty of money.

【4】What might be the most suitable title for the passage?

A. An Ancient Palace is Uncovered

B. More Terra-cotta Warriors Are Found

C. Archeologists Are Waiting to Dig a Tomb 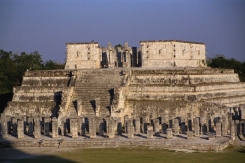 In 1841, a book was published which astonished the world. It was called “Incidents of Travel in Central America, Chiapas and Yucatan”. The author John Loud Stephens had just returned from a long, difficult and dangerous journey through the thick rain forest of southern Mexico and Guatemala. He had once been there with Frederick Catherwood, an architect and artist, to search for the remains of a lost civilization known as the Mayas(瑪雅). Very little was known about the Mayas at that time, but Catherwood's drawing in the book showed incredible cities with temples, pyramids and other buildings as impressive as those of their northern neighbors, the Aztecs. These cities, however, were deserted. The inhabitants(居民) had disappeared almost a thousand years before.

Since that time, far more has been learned about this remarkable civilization. The Mayas had a highly-developed system of government and of agriculture, as well as an incredibly accurate system of measuring time. They were also wonderful engineers capable of moving huge blocks stone long distances and cutting them to accurate shapes and sizes.

And yet although the Mayas knew about the wheel, they never used it. Neither did they use metals other than copper. What is ever more surprising is that they suddenly abandoned many of their cities and built new ones in the jungle. Some time around AD 900, Mayan civilization collapsed(崩潰). By the year 1200, their last great capital,

Who were these strange people and the even stranger gods they worshipped? What brought about their sudden and mysterious collapse? Some writers have tried to prove that the Mayas had contact with visitors from space and even that they themselves came from another planet. Some people believe that their civilization came to an end because the Mayas never developed a proper resistance to local germs and diseases. All we really know is that when the first Europeans appeared off their coast in 1517, this great and mysterious culture was only a memory.

【1】Stephen's book astonished the world because .

A. it was the first time people heard about Mayas

B. the Mayas were excellent builders and farmers

C. he had experienced so may difficulties to find this lost civilization

D. it described that the Mayas used to be an advanced civilization

【2】 One of the most surprising findings about Mayas was that .

B. they knew how to build pyramids with stones

C. they deserted their cities and moved to new ones

D. they built cities which they never lived in

【3】At last Mayas disappeared from the world most probably in .

【4】What brought about Mayan sudden collapse?

A. Tropical germs and diseases.

D. No one knows for sure. 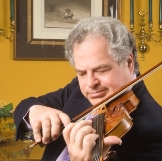 On November 18, 1995, Itzhak Perlman, the famous musician, came on stage to give a concert. If you have ever been to a Perlman concert, you know that getting on stage is no small achievement (成就) for him. He suffered from a disease as a child, and so he walks with the help of two walking sticks.

The audience (觀眾) sat quietly while he makes his way across the stage to his chair and begins his play. But this time, something went wrong. Just as he finished the first few bars, one of the strings (弦) on his violin broke. We thought that he would have to stop the concert. But he didn’t. Instead, he waited a moment, closed his eyes and then signaled the team to begin again.

Of course, anyone knows that it is impossible to play a pleasant work with just three strings. I know that, and you know that, but that night Itzhak Perlman refused to know that.

When he finished, there was a breathtaking silence in the room. And then people rose and cheered. He smiled and said—not proudly, but in a quiet attitude—“You know, sometimes it is the artist’s task to find out how much music you can still make with what you have left.”

This powerful line has stayed in my mind ever since I heard it. And who knows? Perhaps that is the meaning of life—not just for artists but for all of us.

So, perhaps our task in this fast changing, puzzling world in which we live is to make music, at first with all that we have, and then, when that is no longer possible, to make music with what we have left.

【1】What made Itzhak Perlman’s performance at the concert special on November 18, 1995?

A. He just recovered from a serious illness.

B. He was late for the stage.

C. He had a quarrel with the audience.

D. His string of violin got broken.

【2】 Why didn’t Itzhak Perlman accept the fact on the stage?

A. He was a person of pride.

B. He thought the audience didn’t see that.

C. He decided to succeed with bad conditions.

D. He didn’t see the string get broken at all.

【3】 Why did the audience stand up after the performance?

A. They were moved by his spirit.

B. They were moved by his disease.

C. They laughed at his action.

D. They wanted to relax.

【4】 What is the best title for the passage?

A. When you lose the most important thing

B. How can you give it up easily?

D. Playing a violin to yourself